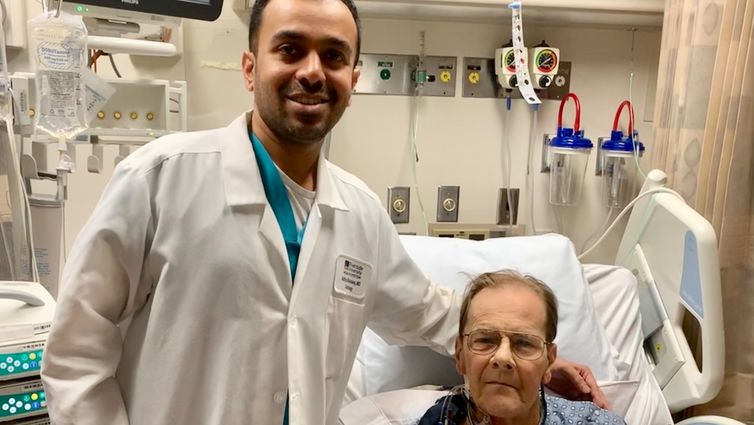 Seventy-year-old David Quiett from Yucaipa, CA, gives a thumbs up with his surgeon Aditya S. Bharadwaj, just hours following the nation’s first complex coronary intervention with an Impella heart assist device through a single access point in the axillary artery.

November 13, 2019 — In a first of its kind in the United States, cardiologists at Loma Linda University International Heart Institute have performed a pioneering coronary intervention with an Impella heart assist device (Abiomed) and stent placement through single access from the axillary artery in the shoulder. The new procedure offers surgeons another option to help save the lives of people suffering severely calcified coronary heart disease, which kills more than 370,000 Americans every year, according to the centers for disease control and prevention.

Seventy-year-old Vietnam veteran David Quiett presented at Loma Linda University Medical Center with a heart attack. Physicians quickly learned that he had severely calcified coronary artery disease in his major arteries. He was in need of stents and a heart-saving pumping device. But surgeons were unable to insert both interventions in separate vascular entry points because of the patient’s calcification. The pumping device is usually inserted through the femoral artery near the groin, and stents are placed through a separate artery.

Due to the patient’s condition, there were no viable traditional arterial access points. With no options left, Loma Linda University Heart Institute interventional cardiologist Aditya Bharadwaj, MD used the axillary artery — a major artery in the shoulder — to install the stents and the pumping device. But this involved risks because working with arteries near the neck creates greater risk of stroke.

Bharadwaj said the success of the procedure opens the door for patients around the country to have more viable cardiovascular intervention surgeries.

“Physicians have conducted single-access procedures through the femoral artery near the groin but never through the axillary artery,” Bharadwaj said. “In this day and age, nearly any challenge can be overcome. Patients who are not eligible for bypass or stents will now have more options.”

Quiett and his wife Ann are grateful for the expertise and care they received at Loma Linda University International Heart Institute.

“I am grateful the ambulance took my husband to Loma Linda University Medical Center because they are the poster child of what a hospital should be, from care to expertise,” Ann said. “They saved my husband’s life.”

Quiett was up walking several hours following the procedure, talking, eating and even gave his surgeon a thumbs up. He was safely discharged two days later.

For more information about the International Heart Institute and all they have to offer visit their website.

Crossing a Complex CTO Using BTG Crossing Devices
Is Paclitaxel safe in the periphery? The breakdown of the Zilver PTX data
The Next-Gen Cath Lab - Addressing Critical Issues in 2019 and Beyond (CME/BRN/ASRT)

Tweets by @invasivecardiol
Back to Top